"Pilot" is the premiere episode of Season 1 of Helix. It originally aired as part one of the two-part series premiere on January 10th, 2014 (10:00PM EST) on Syfy in the US, and on Showcase in Canada.

Dr. Alan Farragut and his team of CDC scientists are called to a remote Arctic Research Base where his brother has been infected with a deadly and unknown virus. Soon, Alan and his team realize that there are secrets being kept.

Peter Farragut is running down a hall. He manages to enter an access-controlled area, but is grabbed from behind. Hiroshi Hatake and Daniel Aerov enter a work area that includes opened animal cages. They find two men who have been killed and Peter, who is still alive but appears to be infected by some disease. Hiroshi offers Peter water. After Peter ingests the water, something throbs in his throat. Daniel asks what it was and Hiroshi responds, "Progress".

At the headquarters for the Centers for Disease Control, Alan Farragut briefs new field officers. An attendee is staff member Sarah Jordan. He describes an outbreak of cholera in London, England that was contained by removing the handle from the pump on a contaminated well, but his presentation is interrupted by the arrival of Julia Walker, Alan's ex-wife. Alan learns that a distress call has been received from a remote research facility by a U.S. Army listening post, asking for help in front of a possible retrovirus contagion. At a meeting of the response team, Major Sergio Balleseros says he will be accompanying the team to represent the Army. Julia tells Alan that his brother Peter is one of the affected. Dr. Doreen Boyle is also on the team. 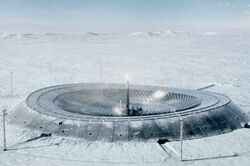 During the helicopter transfer, Alan assigns tasks to the Response Team members; himself and Sarah will deal with the investigation concerning the dead people to establish the extent of the illness, Julia will focus on the cause of the illness while Doreen (to which he refers to as Irina) will collect samples from animals in Peter's lab trying to trace back the source of the illness. Moreover, Alan informs the team to act following the BSL 4 protocol until further orders.

Upon arrival at ABS, the response team's members meet Doctor Hiroshi Hatake, director research of the facility, and his head of security Daniel Aerov. They inform the newcomers that there are no further infections, and since "most likely" the virus does not travel airborne no quarantine regime was established in the base. All Response Team members have an RFID chips injected into their left hands that supposedly give them unrestricted access to the facilities on the base. In the elevator travelling to the underground levels, Hatake informs Alan that 106 scientists from 35 nations and support staff of 15 are currently at ABS.

Alan and Julia visit Peter in a room where he is constrained. While Alan talks to Peter, Julia takes a sample of Peter's blood. Peter whispers to Alan the words "White Room". Julia tells Alan the blood is black. Peter breaks free of his restraints and tries to needle of the blood sample sleeve into his brother screaming the words "everyone lies!". Julia manages to inject some drug into Peter to bring him under control. In the meantime Daniel informs Sarah that there is just one hour satellite for day to exchange data with the outer world.

Doreen and Sergio examine Peter's lab and find genetically modified neutered mice. Doreen is incredulous when Daniel Aerov tells her that there are no experimental monkeys.

Alan, Julia and Sarah enter the holding area where the bodies of the two scientists who were working with Peter are in body bags. When Sarah opens one of the bags, they find that the corpse's soft tissue has dissolved into black goo. Sarah vomits into the mask of her hazmat suit. Back in the locker room the three agree that they have never seen anything like what came out of the body bag. Julia asks Alan if he still believes they are dealing with a retrovirus and he replies that other possibility are hemorrhagic fever, Ebola or Marburg, but nothing explains such a degradation of tissue.

Doreen determines that the virus is not airborne through a PRC test and that it is safe to remove their hazmat suits. When Balleseros disassembles a drain, Doreen finds fur from a rhesus macaque in the trap. Monkeys are among the main agents of zoonotic transfer of virus from animals and mans and viceversa.

Julia Walker goes to Hiroshi's office to learn the purpose of Peter Farragut's research. Hiroshi tells her that Peter was working on mutagens. Hiroshi asks Julia if she has children.

Alan examines Peter's living quarters, and finds a thumb drive contains Peter's video diary entries. Sarah enters the room to inform him that the tissue sample are ready. In the first video Peter describes incidentals about his life and mentions that he is seeing someone whose initial is "T." While he is speaking, Peter makes a sign with his right hand that Alan explains the brothers used to use to warn each other about the dangers of their father's drinking and anger.

Julia calls Alan back to isolation, where Peter has awakened and escaped by forcing his way into the air duct system. Hatake berates Alan for leaving a bone saw where Peter can reach it. At Hatake's orders, Aerov seals the air ducts and floods them with a gas that should disable Peter Farragut. Alan insists on participating in the recovery and enters the air ducts wearing a mask. He senses a presence in the ducts with him then finds a body which he first believes to be Peter's. The body proves to be that of a security guard who has been killed and had his right forearm sawed off. The bone saw is abandoned nearby. The body is removed from the duct. Alan asks himself why the pathogen is making Peter stronger.

Doreen and Sergio force their way into a laboratory after their RFID chips do not work and find a living monkey that attacks Doreen. After Balleseros kills the monkey, something throbs in its throat.

After Julia returns to the laboratory being used by the team, she and Sarah talk about Alan. Julia says that Alan "picked a good one." Sarah tells Julia that there is nothing romantic about her relationship with Alan. Julia responds that eight years ago she would have said the same thing. At Sarah's suggestion, Julia searches for viruses that don't meet modern definitions. She finds one that measures only fifteen nanometers. Julia goes to tell Alan what they found.

In his quarters, Sergio Balleseros removes parts for a miniature satellite dish from his clothing. He goes outside ABS and communicates with an unknown site. As he turns back toward the base, he realizes he is standing in a field of frozen monkey corpses. He goes back inside and talks with Hatake, who is secretly listening to Alan, Sarah and Julia talk about the virus they found and about how it is changing Peter in an unknown manner. Balleseros tells Hatake that the schedule for the "delivery" changed when the CDC showed up. Balleseros also says that the people both Balleseros and Hatake work for are not happy, and that Sergio has to clean up Hiroshi's mess.