This article is a stub. You can help Helix Wiki by expanding it.

Daniel Aerov (born Miksa Ashoona; aged 27+)[1] is the head of security at Arctic BioSystems. Having worked with and for Dr. Hiroshi Hatake for most of his life, he is fiercely loyal and dedicated to helping the head of the facility achieve his goals. He remembered first meeting Hatake at an orphanage in Barrow, Alaska;[2] however, he was actually taken from his family which includes his twin brother Toluk and sister Anana.[3]

Daniel was the first to greet the response team when it arrived at Arctic BioSystems. He personally injected the RFID chips into the left palms of the visitors. He told Sarah Jordan that there was a narrow window each day when satellite communications were available. He later lied to Doreen Boyle, telling her that ABS had no test monkeys when it actually did.[2]

It is revealed that he is a stolen twin taken by Arctic Biosystems in the episode "Aniqatiga", that his true name is Miksa and that his brother's name is Toluk.[3]

Daniel accepted his identity. He protected Anana and let her leave the base. He refused to go with her, saying that he helped create the problem and it is up to him to fix it.[4]

Daniel attempts to hand the virus over to the Scythe, in exchange for the safety of Hiroshi. Daniel is then shown to be captured. As Hatake refuses to choose between Daniel and Julia, Daniel forgives Hiroshi, and purposefully activates the bomb around his neck to save Julia, causing his head to explode. Hatake painfully mourns over the loss of his son.[5] 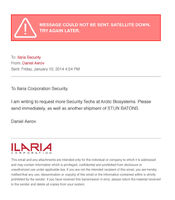